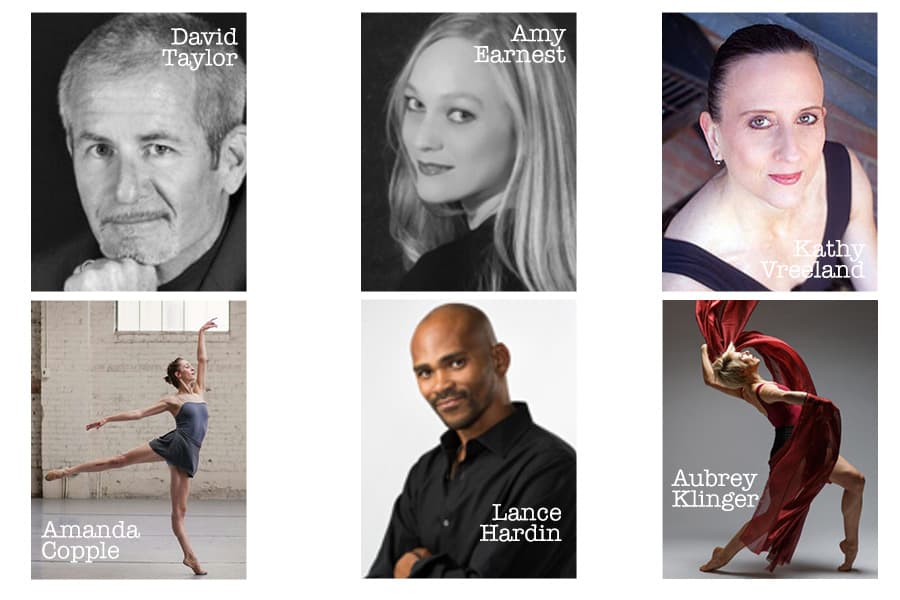 David Taylor has been professionally involved in the Colorado dance community for the past forty-six years. During the course of a twelve-year dance career, he began choreographing in 1976, and since then has created over 100 original works. In 1979, he founded the David Taylor Dance Theatre, which for thirty-two years was recognized as one of the Rocky Mountain region’s most acclaimed dance organizations, and Denver’s original contemporary ballet company. Mr. Taylor has received three National Endowment for the Arts grant awards along with the City and County of Denver’s first Individual Artist Fellowship award for dance, and in March of 1997, he and his company were proud recipients of the State of Colorado’s Governor’s Award for Excellence in the Arts. He has been commissioned to create ballets for Opera Colorado, the Colorado Symphony, the Denver Chamber Orchestra, the Museum of Outdoor Arts and the Up Close and Musical Ensemble, the National Repertory Orchestra, the Colorado Wind Ensemble, and for the Dayton Ballet in Ohio. He has also staged works for the Aspen/Santa Fe Ballet, the Lone Star Ballet of Amarillo, Texas and for the Canyon Concert Ballet in Fort Collins and his original and innovative productions of “The Nutcracker” and “Rainforest” garnered national critical recognition and for twenty years, were booked extensively across the United States. Mr. Taylor has additionally served as a Board member for the Mayor’s Commission on Cultural Affairs, as the Vice President for the Colorado Dance Alliance, as a peer panel member for the Colorado Council on the Arts, and in 2008, he received the Carson-Brierly Dance Library’s prestigious “Living Legends of Dance” Award.
Currently, Mr. Taylor serves as the Artistic Director and upper level ballet program faculty member for Denver Ballet Theatre. He also continues to be in demand as a guest master class teacher in ballet technique, pas de deux, pointe, variations and dance history for numerous ballet schools, companies and summer programs throughout the state and through his extensive background in metaphysical studies, sacred dance and ritual he also continues to conduct sacred dance lectures and workshops for many statewide and national organizations. Mr. Taylor founded the Zikr Dance Ensemble in 2009.The company employs some of the finest ballet-trained dancers from numerous companies along Colorado’s front range and has to date, presented numerous successful performances to consistent critical acclaim and standing ovations in Denver, Fort Collins, Boulder, Carbondale, Crested Butte, Pagosa Springs, Leadville, Ouray, Ridgway, Niwot, Salida, Alamosa, Parker, and Grand Junction, CO and in St. Paul, MN and Long Beach, CA.

Amy began dancing at the age of three in Atlanta, GA. Mrs. Earnest received her training with the School of Atlanta Ballet under the direction of Tom Pazik, School of American Ballet, Joffrey Ballet, and Pacific Northwest Ballet School. As a professional dancer she performed with Hartford Ballet, North Carolina Dance Theatre (currently Charlotte Ballet), Tulsa Ballet, and Pacific Northwest Ballet. She also was a finalist in the prestigious New York Ballet Competition of 1996 and was a member of the Chautauqua Ballet from 1998 to 2000. Mrs. Earnest has been teaching and coaching students for the last 12 years and is certified with the American Ballet Theatre National Training Curriculum in Primary through Level 3. Mrs. Earnest owned and directed Avant-Garde School of Dance, along with her husband Lance Hardin, where they choreographed and produced numerous performances including an annualNutcracker. Mrs. Earnest has trained and coached students that have continued their training with prestigious schools including American Ballet Theatre, Joffrey Ballet, Houston Ballet, and San Francisco Ballet School. Mrs. Earnest is also a certified Pilates instructor receiving her certification through D.K. Body Balancing accredited by the University of Nevada Las Vegas and approved by the Nevada and Arizona State Boards of Physical Therapists. Mrs. Earnest also enjoyed her role as company teacher with Dawson Wallace Dance (formerly David Taylor Dance Theatre), from 2008-2012, along with a variety of requests as guest instructor. Most recently Mrs. Earnest and her husband Lance Hardin have served as Co Dance Directors at The Myles Reif Performing Arts Center in Grand Rapids, MN.

A Wyoming native, Kathy has dedicated her life to dancing. She has trained and danced with the country’s finest instructors and professionals and has an extensive dance resume. dance highlights include Dallas Ballet, Irving Ballet, Denver Civic Ballet, Canyon Concert Ballet, industrials and trade/stage shows in Las Vegas and many years teaching in Fort Collins, Cheyenne, Laramie (former dance studio owner for 10 years) and Denver.

Lance Hardin is a native of Chicago, IL where he received his training from Larry Long at the Ruth Page Foundation School of Dance. He holds a Bachelor of Science Degree in Ballet from Indiana University, where he studied under the direction of Jean-Pierre Bonnefoux, Patricia McBride, Jacques Cesbron, and Violette Verdy. As a professional dancer, Mr. Hardin has danced with Pittsburgh Ballet Theatre, North Carolina Dance Theatre (currently Charlotte Ballet) , Chautauqua Ballet, Milwaukee Ballet, Ballet Nouveau Colorado, Boulder Ballet, Springfield Ballet Company, and the Yoko Kasai Ballet Studio located in Japan. Mr. Hardin has taught dance for the past 23 years and holds numerous choreographic credits including works for Boulder Ballet, James Sewell’s BalletWorks Project, The Denver Independent Choreographer’s Project, and Springfield Ballet Company. Mr. Hardin and his wife Amy Earnest have served as Co Dance Directors at The Myles Reif Performing Arts Center in Grand Rapids, MN since 2012.

Amanda is a Colorado native and received training as a kid in hip hop, breakin, jazz, tap and ballet. After high school she made her way to Los Angeles to pursue a double major in business and dance at Loyola Marymount University. During this time she worked for Monat Dance and BodyTraffic Company. Realizing contemporary ballet was her goal she transferred to the Alonzo King LINES Ballet BFA program in San Francisco and graduated two years later with a BFA in dance and a Business Minor. Amanda spent two and a half years working with Wonderbound, a contemporary ballet company, in Denver, Colorado. She is excited to be teaching in her hometown!